Unique Retreats loves to provide experiences in beautiful, traditional or even unusual surroundings. We believe that architecture and the feeling or ambiance that a guest experiences on arrival created by local hands provides part of this. The following text is an analysis of Thai history and architecture and some of its underlying influences.

Thailand, this beautiful country full of contrasts, distinguished culture, and distinctive architecture. Thailand is a major international hotspot for travelers and tourists because of its exotic natural beauty, its friendly people, great food, tropical location, and of course unique design/architecture. When one thinks of Thailand, the elongated glistening gold roofs and elaborate Buddha statues come to mind. Thailand is all of this and so much more. A little Bit of History

The Oriental inspirations can be seen and sensed in all aspects of life in Thailand, but yet several different cultures have impacted the architecture and can be recognized in the design influences of the country. Chinese, Burmese, Khmer, and even Indian influences have had an effect on the country’s architecture and design through the centuries. Thai art and design are strikingly colorful and the architecture is typically defined by the multi-tiered swooping roofs. This feature is a centuries old structure that has been embraced into mainstream construction in the country over the years. These roof designs were initially designed for the Thai temple, or wat. These temples, or places of worship, also served as community centers and acted as gathering areas for the very social Thai people. It is said that the swooping roofs were symbolically designed in order for worshippers to reach out and attain the heavens. This particular religious vision is everywhere from the obvious places of piety to the common single family dwellings. Faith and religious superstitions played a huge part in traditional Thai life.

Single family houses were built primarily from wood and stood on stilts to keep the home safe from animals and water during the rainy seasons. The most basic houses possessed a single room while the more complex ones had several quarters united by bridges, sharing a common veranda area. All structures were spiritual in nature and traditionally built in accordance with religious principles. Materials used, orientation of the house, up to having a spiritual person present when the first column was put up were all essential elements to consider when building a house in traditional Thailand. The belief in “good spirits” and “bad spirits” was omnipresent in everyday life in Thailand and permeated into every aspect of living, even in the construction of a home. 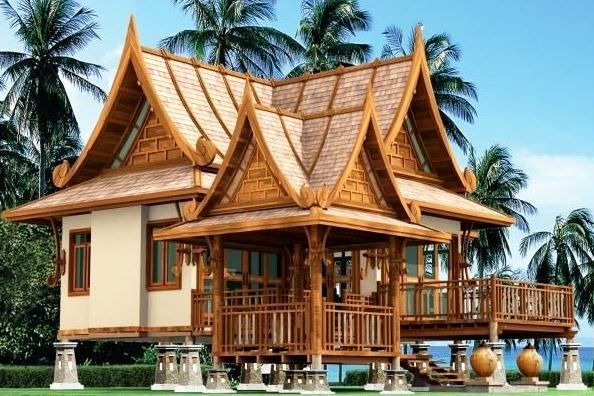 The early construction materials used to build the temples were mainly wood and stone. Some of these buildings have sadly not stood up to the test of time, while others have been beautifully renovated and restored through the years. Glass mosaic, gold leaf, and the iconic serpent-dragon sculptures were used to ornate the buildings. These animal symbols came mostly from the Indian impact on Thailand and blended well throughout the years into the Buddhist experience and practices.

One of these wonderfully restored places is the Wat Pho Temple in Bangkok, capitol city of Thailand. Wat Pho, set on the the Chao Phraya River, is one of the largest and most visited temples in the country. It was initially built in 1782, but has been intrinsically restored and expanded through the years. It is also commonly called Temple of the Reclining Buddha and was originally a place for traditional medical and Thai massage studies and practices. Most of the initial temple’s architecture is of the Ayutthaya style, referring to the period between the 13th and 18th centuries. The main feature of the Ayutthaya style is the emblematic Buddha statue. Wat Pho swanks the largest Buddha in Thailand, the 46m long reclining Buddha, that was added in 1848. 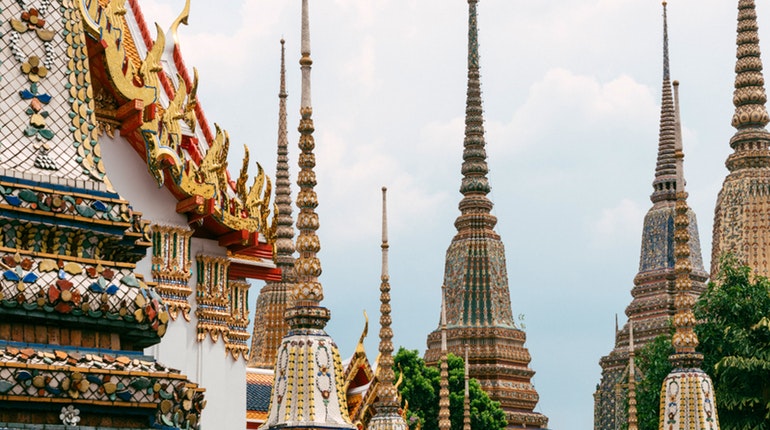 At the end of the 19th century, Thailand architecture started to become more modernized and western influences could be seen in the new structures. As the royals and influential people travelled more and more, they brought back international concepts and inspirations into Thai culture, merging and forever changing the basic elements of Thai design and architecture. Sophisticated inspirations from Portugal, France, and England were apparent throughout the country at this time, especially in Bangkok and Phuket.

Family homes have seen the influence of western culture over the years while also striving to keep tradition and Thai philosophy alive. Vernacular architecture may not be 100% active in today’s Thai architecture, but more and more architects are deciding to go back to tradition and choosing to incorporate some methods of traditional and cultural architecture into their designs and constructions. One such residence is the Trika Villa located in Chiang Mai. Trika Villa is a 425 square meter house that was designed with an inside-outside living proposal. The villa has five bedrooms, five full bathrooms, a dining/living area that is fluidly connected to the outside pool space. The house is made from natural materials like clay and bamboo that automatically reduces its carbon footprint. This organic architecture merges modern living with touches of traditional materials. An exclusive Indian door gives this residence its Oriental-Thai distinctive look. This house has every amenity to accommodate modern living, yet feels natural, organic, and Thai.

Your opportunity to stay and experience the life!

SEE MORE ABOUT & RENT THIS VILLA

Peaceful and extravagant are two of the main preliminary concepts used when designing Thai edifices. These two contrasting concepts are somehow blended intricately well to create spaces that are fluid and yet extravagantly decorated. Traditional temples with their tall swooping, finely painted gold rooftops are still present in Thailand and embody the traditions of an extremely faith based culture. These spaces are welcoming and inviting to locals as well as visitors and provide a space of tranquility while offering a visual overindulgence of glimmering sculptures, exceptionally designed elements, and bright colors. Individuals get a feeling of serenity while being submerged in optical excesses.

There is no doubt about the distinct nature of Thailand architecture and design. Architecture in Thailand is a main cultural heritage and was created from the people’s communal way of living and also their strong religious beliefs. The multi faceted concepts derived from diverse cultures have created a clear and unique look that is to this day a strong attraction and drive for visiting this beautiful country.